Who do you think I am?

A label-free encounter with Naomi Gassler

If you were to walk down a street in your neighborhood and see me standing there on the sidewalk, what would you think? Would you just notice a tall woman, or would you be puzzled by my appearance, unable to decide whether I am a man or a woman? You most probably would not ask yourself whether I have a family or if I had studied at university; you would almost certainly not guess that I have two grown-up daughters, hold a Ph.D. in mathematics, have studied Tibetan Buddhism for 25 years, and live in a buddhist centre in the South of France.

In the unlikely event that you stopped your brisk walk and engaged me in a conversation, as a polite and well-behaved member of modern society you might hesitate to address your curiosity about my personal history and gender identity right away. Perhaps I would enjoy talking with you, we would sit down for a coffee together, and eventually you might feel at ease asking your questions. Here’s what I would tell you.

All my life I experienced dissatisfaction and unease related to my social role. After living as a man for close to half a century, an idea formed in my mind. I could cease to be a man, and live as a woman for the rest of my life. Once that idea was born, it dawned on me how many of my problems could be traced back to my assigned gender. Very quickly, it became clear to me that I either needed to change my gender or live the rest of my life in a state of a light but all-pervasive depression. Changing my gender was the only reasonable choice, even though I was sometimes terrified of how my friends and my environment would react to this change. Also, I didn’t know whether I could view myself as female. And, being a follower of Buddha’s teachings which emphasise the need to gradually dissolve all our concepts, both of ourselves and of the world around us, I was worried that changing my gender label from male to female was introducing more concepts in my mind rather than dissolving them.

Less than two years after this idea had first formed, while still struggling with my fears and unanswered questions, I announced to my surroundings that I was transitioning from male to female and changed my name from Robert to Naomi. Shortly after my announcement I entered a two-month period of solitary personal retreat during which I had no interaction with another human being. At the end of these two months of isolation, I was wondering whether the absence of any social interaction would clarify how I was relating to myself.

So I asked myself, “Do I relate to myself as male, female, gender fluid or non-binary? Do I relate to myself as Robert or Naomi?” Thinking about these questions, it became clear that none of these labels applied. I was simply myself, and that was it. I found this conclusion rather stunning. If I was at ease with being myself, why then had I invested so much time, energy, and emotions into the process of transitioning from male to female? Was I fooling myself?

Again, I reflected on this paradoxical situation, and slowly came to realise that those two things were actually not contradictory. Here is how I resolved this paradox for myself.

When we humans relate to each other, most of the time we have an utterly incomplete understanding of the other person. We habitually make a quick judgment about what kind of person we are dealing with, and then use that personality type as a first approximation. We might for example decide that the person in front of us is an extroverted intellectual female and interact with them accordingly. Of course all of these decisions are not taken consciously but happen without us even noticing. The most basic simplification option our subconscious has at its disposal is to identify somebody as male or female.

In my case, how I view myself is far from the mental picture that people have of a male person. Of course the mental image that people have of a female person doesn’t fit me perfectly either, but at least it is closer to how I view myself. It is because of this that I am proclaiming to the world that I am female and that I am changing my appearance in a way that makes people see me as female rather than male.

However, I realised, and this was a key insight, that there is no need to change the way I see myself. As I know myself better than anybody else ever could, I do not need to resort to a simplification. The whole point of a simplification is to help us when we do not know somebody really well. But if we pressure ourselves to change one way or another in order to match a simplified view of ourselves, it invariably leads to mental anguish and disturbs our mental wellbeing. This is exactly why so many women have fought extremely hard for a society where they can break out of their assigned gender roles.

Of course, you might argue that, following this logic, for somebody who knows me really well there wouldn’t be any need to address me as a woman rather than a man. While the argument is clever, it doesn’t hold up to closer examination. If you think that you know me well, but insist on relating to me as male, then you probably didn’t know me that well in the first place. If you do indeed know me very well, and have completely gone beyond seeing me as male or female, you will still need to use some kind of gender label when referring to me in any conversation. The gender label that you use will determine how other people relate to me. So, again, in order to avoid any misperception, you would refer to me as female rather than male. Unless, of course, giving rise to misperceptions was helpful for your own personal agenda.

Now, in this entire discussion you could replace ‘gender’ and ‘gender roles’ with any other label that we apply to each other. If we were vividly aware that any label that we apply to another person is only a simplification, then our interaction would probably be very different; we would be eager to learn more about them in order to move beyond our initial simplified view. What if you started relating to, say, your baker as an unknown human being whose story and emotions are worthy of your interest and sympathy?

As we have seen, if I were to meet you for the first time, I would instinctively simplify or reduce the complexity and richness of your appearance, world view, emotional makeup, habits, history, and so on into a label that makes it easier for me to relate to you. Unfortunately, in our society these labels are often taken as role descriptions, and you might feel obliged to behave in accordance with the label that I have just slapped onto you. Or, even worse, we might identify with the label that other people give us and replace a healthy feeling of who we are with a label. If you have just become a high school teacher, you might start to think of yourself as a teacher and then think that you have to behave in a way that is expected of a teacher. I think that would be a gross mistake! You are so much more than a high school teacher, and, of course, your job might come to an end quite unexpectedly, and then how would you see yourself?

You might wonder whether my transition was successful in the sense that it made me a happier person. My answer is a resounding “Yes”, and I know that my friends who have observed my transition would agree. Of course, emotions connected to my gender change do arise but they don’t persist for too long. However, my newly found ease in life is not just due to a change of gender. The reflections and contemplations that I outlined above helped me to feel free of any label or gender that is applied to myself, to stop thinking about how other people see me, and to just simply be. 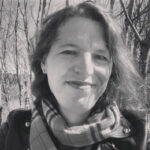 Naomi is a writer, longtime meditator, and teacher in the Rigpa organisation. She studied physics and mathematics and received her Ph.D. from Northeastern University, Boston, USA. In 1997 she moved to Lerab Ling, Rigpa’s retreat centre in the south of France, and has since then worked to help with the translation and transmission of the ancient Buddhist wisdom to the Western World. She is passionate about finding ways to integrate the wisdom and compassion of the teachings of the Buddha into our everyday activities, and thus dissolving any separation between daily life and one’s own spiritual path. Naomi, a transgender woman, enjoys cooking and baking for her friends and for her family, as well as planning and constructing wooden chalets in Lerab Ling.
Naomi’s recommendations if you wish to learn more about gender issues: Gender Rebels Podcast: https://genderrebels.podbean.com If you wish to know more how it feels to be transgender: Conundrum, Jan Morris, NYRB Classics 2006

For A Technology Fit For Humans
Zum Beitrag
#heartwise